A Fig Tree, a Temple, and God’s Purpose 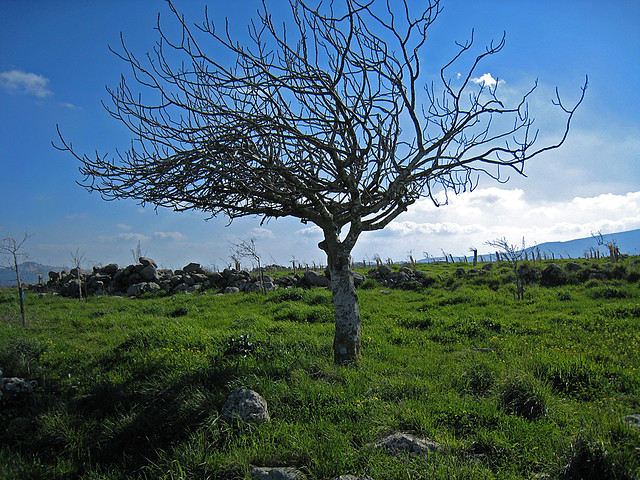 Remember when Jesus cursed the fig tree in Mark 11?  That was weird, wasn’t it? You know what was particularly weird about it? Jesus cursed it because “He found nothing but leaves, for it was not the season for figs” (Mark 11:13).  Why in the world is Jesus cursing the tree for not having figs, when it wasn’t even the season for figs? Well, I think if we pay really close attention to what is happening in the surrounding context, we may get ourselves an answer.  And it might not be so weird after all.

Jesus had just entered Jerusalem and He immediately entered the temple and looked around.  Since it was late and He wasn’t staying in Jerusalem (but a small suburb called Bethany) He left the temple to retire for the night.  It’s on the next day while He is making His way back to the temple that He sees the fig tree with no figs.  He curses the fig tree for being out of season by saying, “‘May no one ever eat fruit from you again!’ And His disciples were listening” (Mark 11:14).

Whenever you read a seemingly insignificant little detail like “and His disciples were listening” it probably isn’t insignificant, and it probably means you should be listening too.  You should probably begin searching for a deeper meaning in the story than what appears on the surface.

After this incident with the fig tree, Jesus returns to the temple.  This time, He doesn’t just look around, but He creates a huge disturbance. “He entered the temple and began to drive out those who were buying and selling in the temple, and overturned the tables of the money changers and the seats of those who were selling doves; and He would not permit anyone to carry merchandise through the temple” (Mark 11:15-16).

Jesus makes it impossible to conduct business at the temple. He stops the things that were essential for the temple to fulfill its purpose. People need to purchase animals in order to sacrifice animals. Many traveled from afar and rather than risk losing their animals along the journey, they would arrive at the temple to purchase an acceptable animal, then the priests would offer it. That way they are still offering up their best to God, but if they didn’t own a proper animal or couldn’t travel with one, they could purchase one.

The sin is not that people purchased animals at the temple, but that God’s “‘House shall be called a house of prayer for all the nations’ But you have made it a robber’s den” (Mark 11:17).  Notice two things.  First, it is supposed to be a house of prayer “for all the nations” (Mark 11:17; Isaiah 56:7).  The temple was not opened to all the nations.  It was for Jews only.  Secondly, it was made into a “robber’s den.” This might imply that there was cheating and dishonesty taking place in the selling of animals.  Or it might imply that the House of God which was for “all the nations,” became a place for people who hated all the other nations. The word “robber” could also be translated as “insurrectionist.”

The temple should be a place of worship for all the nations, but instead it is full of dishonest people who hate the other nations and, like insurrectionists, want to overthrow them. This is one of the very reasons that Jesus’ claim to be the Messiah was repudiated.  Rather than overthrowing the Romans, He was crucified by them!

The major point is that the temple is not fulfilling its intended purpose.  When Jesus looked around the temple, He didn’t see a place of prayer for all the nations. He saw a den of robbers. Because of that, the temple was producing no fruit.  There was once a time when God’s temple was fruitful, but that season had passed.

The evening after the disturbance in the temple, Jesus and His disciples were leaving again for Bethany.  As they walked they passed that same fig tree. Peter looked at it and said, “Rabbi, look, the fig tree which You cursed has withered” (Mark 11:21).

The fig tree is an illustration. It illustrates what happens when one fails to produce. Those listening must ask, what am I producing? Unlike the fig tree and the temple, our season has not passed.  We are in it right now.  It is our responsibility to be the temple of God, a place for all the nations.  We are challenged with producing fruit for the kingdom. We have a purpose as Christians, to live as the body of Christ, taking His message and ministry to the world. Are you fulfilling your purpose in Christ?

2 Comments to “A Fig Tree, a Temple, and God’s Purpose”