52 Reflections on the Gospel of John: #9 Cleansing the Temple 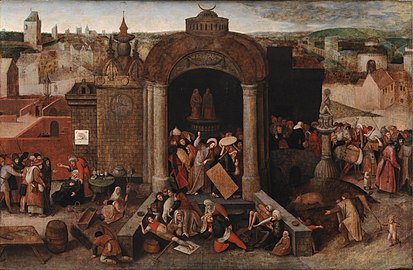 Prophets often did strange things to demonstrate God’s Word. Jesus continues this tradition when He enters the temple in John 2. Jesus entered Jerusalem because “the Passover of the Jews was near” (John 2:13). This is the first of three Passovers (John 6:4; 11:55) in the Gospel of John (which is why we say Jesus’ ministry lasted 3 years). In the Synoptics (Matthew, Mark, Luke) Jesus cleanses the temple also, but John’s telling is unique.  For instance, in the Synoptics, Jesus cleanses the temple as one of His final acts in Jerusalem leading to His arrest and crucifixion. In John, however, He cleanses the temple right at the beginning of His ministry. This placement is theologically motivated. I think it’s supposed to tell us something rather important about Jesus. Something that John wants you to know right from the start, to be kept in the reader’s mind throughout the rest of the Gospel.

Another unique feature of John’s account of Jesus cleansing the temple is the symbolic way that Jesus interprets His actions. Right after Jesus drives everyone out the temple He is asked to explain Himself. This also happens in the Synoptics (Mark 11:28; Matthew 21:23; Luke 20:2). In John, however, His answer is quite different. The question is also slightly different. Matthew, Mark, and Luke all portray the question as “By what authority are you doing these things?” But John has particular interest in “signs,” so notice how the question is asked: “What sign do you show us as your authority for doing these things?” (John 2:18). At least that’s how the NASB translates it. The word “authority” (ἐξουσίᾳ), while in the Synoptics, is not actually in John. The question is simply: (τί σημεῖον δεικνύεις ἡμῖν ὅτι ταῦτα ποιεῖς;) “What sign do you show us because you do these things?”

Now that question could be taken one of two ways. First, as the NASB thinks, it could be: “What sign will you now show us to prove that you had the authority to cleanse the temple?” Or, the question could be more like this: “What sign are we supposed to see from you cleansing the temple?” When a prophet would do some extravagant demonstration like this, there is supposed to be a meaning attached to it. What is the sign of cleaning the temple? What does it mean? To take the question this way, which I think is probably correct, means that cleansing the temple was itself a sign, though non-miraculous, and Jesus is now going to explain the spiritual meaning of it.

Here is Jesus answer: “Destroy this temple, and in three days I will raise it up” (John 2:19).The Jews respond in the typical manner. By typical, I mean the way everyone always responds to Jesus, they will miss the spiritual point and get lost in the physical details.  They snort back incredulously, “It took forty-six years to build this temple, and You will raise it up in three days?” (John 2:20).  This is when John lets the reader in on Jesus’ true meaning. He clarifies the confusion for us, saying, “But He was speaking of the temple of His body” (John 2:21).

So what does this all mean? Jesus cleansed the temple as a sign. When Jesus says, “Destroy this temple” He actually means, “destroy My body.” And when He says, “in three days I will raise it up,” He is not talking about constructing a new temple, but His resurrection. In this way, the destruction of Jesus’ body parallels the destruction of the temple (which took place in AD 70).  And while Jesus was raised from the dead three days later, I think the implication may be that the temple will be raised also. Perhaps the temple will live on, be raised, as the “body of Christ,” or the church. A common New Testament picture of the church, the body of Christ, shows it is how God’s temple now lives on (1 Corinthians 3:16; Ephesians 2:19-22).

Perhaps then, the “sign” of Jesus cleansing the temple in John 2 is that Jesus will be killed and raised, paralleling that the temple will be destroyed and raised up in His body, the church. The problem with this “sign” though, is that you don’t actually get to see or understand its meaning until after the resurrection. While He is speaking the Jews miss His meaning, but the disciples miss the meaning also. At least, they don’t understand it yet. But, “when He was raised from the dead, His disciples remembered that He said this: and they believed the Scripture and the word which Jesus had spoken” (John 2:22).

The resurrection of Jesus caused the disciples to look back on this event. They looked back and remembered this conversation and it led them to “believe” (The sign led them to believe, remember John 20:30-31?). But what’s interesting is that His disciples believed “the Scripture and the word which Jesus had spoken” (John 2:22). What Scripture did they believe? I think the answer is back in John 2:17, “His disciples remembered that it was written, ‘Zeal for Your house will consume me’” (John 2:17; Psalm 69:9).

All of the sudden, after the resurrection of Jesus, the disciples believed that Psalm 69:9 is about Jesus. Notice, by the way, the entire verse: “For zeal for Your house has consumed me, And the reproaches of those who reproach You have fallen on me” (Psalm 69:9; Romans 15:3). After the resurrection this Psalm became a key Messianic Psalm. Note Romans 15:3 which also applies this verse to Jesus. In fact, the entire Psalm came to be read about Jesus. Each of these New Testament passages applies parts of Psalm 69 to Jesus: John 2:17; 15:25; 19:28-29 (Matthew 27:34; Mark 15:36; Luke 23:36) Romans 11:9-10; 15:3; Acts 1:20. The cleansing of the temple is what opened this passage up to Messianic interpretation.

The cleansing of the temple, coupled with the death and resurrection of Jesus, was a sign that the temple would live on as Jesus’ body in the church. It also opened the disciple’s eyes to believe and to see Jesus throughout Psalm 69, to read it in a new light. Perhaps, it also caused the disciples to read other Old Testament passages about the temple differently, since Jesus links His body to the temple. The temple was seen as God’s dwelling on earth, but Jesus is the truest form of God dwelling on earth. Our next post will examine how Jesus is repeatedly pictured as God’s temple in John.