How is Jesus Equal to the Father? 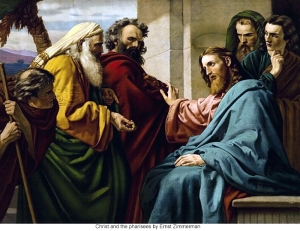 Jesus was condemned by the Pharisees “because He not only was breaking the Sabbath, but also was calling God His own Father, making Himself equal with God” (John 5:18).

So why did Jesus claim this?  Well because Jesus was no “mere human.”  Jesus in fact was equal to God.  There are many passages we use to illustrate this, but I think Jesus’ response to the accusation is pretty clear.  He did not deny it, rather He explained the ways in which He was equal to God.

He begins with an illustration about fathers and sons (John 5:19-20).  Children learn what they see from their Father.  Jesus was a carpenter; Joseph was a carpenter.  Many things I’ve learned only because I saw my father do it.  Because fathers love their children, they want to teach them and show them what they are doing.  In this way, sons are equal to their fathers.  Jesus lists 3 major ways that He is equal to God.

So, when Jesus was accused of calling Himself “equal with God” (John 5:18), He does not deny it.  He explains it.  A father gives his son the attributes and abilities that he has learned.  God gives Jesus life in Himself to bestow it on whoever He wishes.  God gives Jesus the authority to judge mankind.  This is so that they will be equal in honor.